Tournament Spotlight: Duel In The Desert 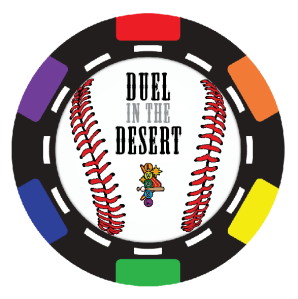 The LVGSL Presents The 2nd Annual Duel In The Desert

After a successful inaugural tournament in 2013 the Las Vegas Gay Softball League is back at it again this Memorial Day weekend with their 2nd Annual Duel In the Desert tournament.  One thing is for sure the LVGSL isn’t shy about using their city’s world renowned entertainment status to attract teams from all over the country.  After all, who doesn’t love Las Vegas?

Dave Mondt is the tournament director for the Duel in the Desert for the 2nd year in a row and he told the DD that Las Vegas is the place to be.  “Our city sets itself apart (from others).  Few cities in the country can compete with the nightlife and dining options available in Las Vegas, particularly at our price point,” said Mondt.

The tournament will boast a five game guarantee to each team participating along with trophies given to the top three teams from each division.  The Duel will feature C and D division tournaments with a special gift given to the first team that registered to the tournament.  Last year, the Duel gave their earliest early bird team a prize too, a shiny new bat donated by DeMarini.  The giveaways and incentives don’t stop there as the tournament will also enter its tournament division MVP’s into a drawing for an air tour of the Grand Canyon too.

The Opening Party will be held at Charlie’s Las Vegas and along with being able to register, players will be able to get the party started with a $10 well/$20 premium liquor bust from 9 pm to Midnight.  If you aren’t hurting too bad from that liquor bust on Saturday at the Sunset Park complex there will be a beer tent and concessions available at the fields all weekend long too.

The softball community will converge on Las Vegas just 4 1/2 months after the always popular Sin City Shootout took place, which is run by the Greater Los Angeles Softball Association (GLASA).  “We have a great deal of respect for the Sin City Shootout, but we believe that, as a destination city, Las Vegas is enough of a draw to support our tournament as well,” said tournament director Dave Mondt.  It looks as though Mondt’s opinion is now a reality with The Duel confirming 27 teams registered between the two divisions.

There will be one umpire for all games in the tournament with a two umpire set up for championship games.  If normal weather holds it will be spectacular softball weather with high temperatures in the high 80’s and temperatures holding steady in the high 60’s at night.

Check out all of the updated information on the Duel In The Desert’s official Facebook page here: http://www.facebook.com/pages/LVGSL-Duel-In-the-Desert/484611571599656

*The DD would like to thank Duel in the Desert tournament director Dave Mondt for his time and contributions to this article.  Stay tuned for more tournament spotlights throughout the year.*

This entry was posted in Tournament Spotlight, Tournaments, Uncategorized and tagged Duel In The Desert, Las Vegas. Bookmark the permalink.