Posted on February 4, 2017 by misterdish

The 2017 NAGAAA Winter Meetings wrapped up late on Sunday, January 29th at the Doubletree by Hilton in Portland, Oregon.  The meetings saw member city delegates, NAGAAA committee chairs and the NAGAAA Executive Board come together to talk about issues, make changes and do the not so glamorous business that allows the organization to thrive.  We’ll break down the buzz worthy moments during the weekend of meetings.

It appears so as NAGAAA Commissioner, Chris Balton announced early on during the meetings that Kansas City was the only city that submitted an intent to bid for the 2019 World Series.  The Kansas City GSWS committee will still present its bid at the 2019 NAGAAA Summer Meetings in Portland and the bid must be certified by the NAGAAA Executive Board.  Should Kansas City be certified as the 2019 host, it would be the smallest member city (by league membership) to host the GSWS since…Kansas City in 1999.

The Austin World Series Committee was represented at the meetings where they reported ending financials, talked about the challenging week that was the 2016 GSWS and how they are working with the NAGAAA Executive Board and the state of Texas to recoup money from expenses laid out for the tournament.  A big shout out went to all of the volunteers from NAGAAA that helped get the fields playable during the washout week. 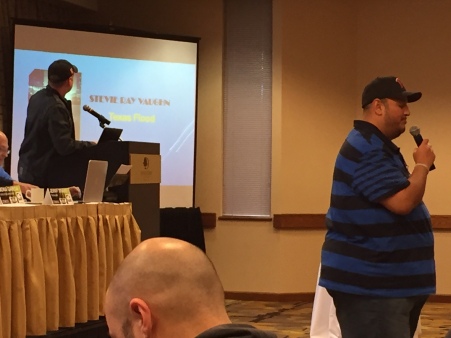 Softball Austin Commissioner, Albert Rodriguez wraps up the 2016 GSWS to the NAGAAA delegation at the 2017 NAGAAA Winter Meetings.

Portland Gearing Up To Host the GSWS

The 2017 GSWS is just 7 months away and the Portland GSWS Committee is hard at work to bring you an awesome player experience while in Oregon this September.  If you’ve never been to Portland, it’s a beautiful and weird place full of fun things to see and do.  Roy Melani, Portland GSWS Committee Director laid out all the plans along with his committee during the meetings.  They even treated some of the new delegates to their amazing bid video that they showed during their winning bid presentation.  If you haven’t seen it, you’ve got to give it a look.  Check it out HERE! 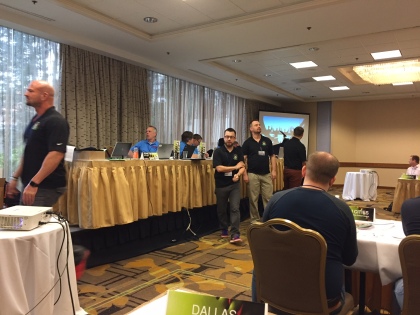 It was a banner membership weekend for NAGAAA as several years worth of work in engaging gay softball leagues around the country resulted in three new cities that were voted in to join NAGAAA immediately.  Representatives from the Pride Sports League of Central Iowa (Des Moines, Iowa), Circle City Pride Softball (Indianapolis, Indiana) and the San Antonio Gay Softball League (San Antonio, Texas) all went through a vetting process, attended at least two consecutive NAGAAA meetings and answered questions in front of a packed house in the membership committee meeting prior to being voted on.  Each city brought forth their current league financials and talked about what their plan would be to field teams on a yearly basis at the NAGAAA World Series.  Each city was voted into NAGAAA unanimously as this international organization has now grown from 43 to 46 member cities.

Automatic bids to the GSWS will be on the line at the 2017 NAGAAA Cup in Columbus, Ohio, May 5th – 7th.  This is a departure from the Memorial Day Weekend spot that the tournament had been in.  Dallas, Texas fought through weather challenges last year to host the NAGAAA Cup in late May of 2016.  The NCAA Division I Men’s Volleyball Championship is being held in Columbus, Ohio the same weekend providing a cross-promotional sports opportunity during tournament weekend.  Dallas Aldridge, former 2015 GSWS Director is heading up the host committee as Columbus is planning a great weekend for A Division and B Division NAGAAA teams.

It’s not exactly clear, but we do know that representatives from Halifax, Nova Scotia have been in talks with NAGAAA officials about potentially joining.  This comes at the same time as Canadian cities like Montreal and Toronto are having trouble taking a team to the GSWS on a yearly basis.  Continuing outreach to Canadian cities will be critical for NAGAAA in the future, not only from an overall membership standpoint, but in terms of growth and to stay in good standing as an international organization.

NAGAAA Delegates pack a large meeting room at the Doubletree by Hilton in Portland, Oregon for the 2017 NAGAAA Winter Meetings.

Tampa Is Busy Preparing For The 2018 GSWS

Ron Frank, GSWS 2018 Director was in attendance at the meetings to update the delegation on Tampa’s progress in hosting the event.  The highlights of the presentation included Tampa having two main host hotels right next to one another with public transportation located in between.  The committee is really playing up the ability to have a “Athletes Village” type of atmosphere with so many hotel rooms so close together.  With recent World Series tournaments being held in mostly landlocked areas it will be a nice change of pace for many attendees to be so close to the beach in 2018.

Hall of Fame  Nominations Are Open

Does your league have someone who has contributed to a level that is above and beyond the norm?  The time is now to nominate them for the NAGAAA Hall of Fame.  Nominations are being accepted through March 15th.  Click the link to be directed to the nomination site.  NAGAAA Hall of Fame Nomination Form

Many months of work by a select committee regarding a total revamping of the bylaws and NAGAAA Instruments of Governance resulted in a new NAGAAA Governing Manual being approved.  Over 80 items were brought up to be adjusted, changed and removed from the new manual prior to it being approved.  This info is good know for the local league membership that thinks their dues are sending their board members on a “vacation” to the NAGAAA meetings.  The hard work of the committee should be applauded as they spent countless hours on the manual, even holding a webinar that was open to the public prior to the 2017 Winter Meetings.

Board Elections See A New Face and A Few Familiar Ones

There were three NAGAAA Executive Board positions up for election at the meetings in Portland.  The Member at Large position and the Treasurer position both had candidates running unopposed.  Richard Twomey was elected to the Member at Large positions by unanimous consent, as was Jerry Travis to the Treasurer position.  The NAGAAA Commissioner position heard comments from three candidates, John Hunking of Toronto, Kevin Riddle, acting Assistant Commissioner from Nashville and Chris Balton, acting Commissioner from Memphis.  A brief closed-door question and answer session was done for each candidate so that the delegation could get a better idea of why each person was running to lead the organization.  In the end, Chris Balton carried enough votes to be re-elected to the NAGAAA Commissioner role for another 2 year term.

The NAGAAA Executive Board taking care of business at the 2017 NAGAAA Winter Meetings in Portland, Oregon.

The GSWS gets more expensive to host and run each year.  Catherine Kelly, NAGAAA Business Development member on the Executive Board understand that and gave an informative report on sponsorships and gifts that were attained in 2016 along with relationships that are opening up for the future.  Sponsors and major givers are beginning to understand that the NAGAAA family is a fiercely loyal consumer base to those businesses that support them.  The future looks to be bright as NAGAAA attempts to continually improve its solvency and ability to weather any potential financial storms.

The highlights of the 2017 NAGAAA Winter Meetings come as we face uncertain times in the United States.  The anger and resentment that much of the country feels regarding the current political climate and what that means for the LGBT community along with other minorities is palpable.  Regardless of the direction the current United States presidential administration goes in we must take solace in each other and the activities in our lives that bring us together as a community.  Softball is that activity for thousands of LGBT men and women across North America.  Send your message of love, acceptance and inclusiveness through softball.  Support your local LGBT softball league.  If your league isn’t a member of NAGAAA, have your local board look into it, because we’re stronger together than fractured apart.

Remember this:  Through discrimination and fear, through hate and ignorance, through hypocrisy and greed, softball and the LGBT community endures.

Good luck to all of the NAGAAA member cities that have started their 2017 leagues and to the ones that are on the brink of kicking off their seasons!  A great year of softball is underway.

The Diamond Dish softball blog was started in 2014 by Jeff Sloan in Kansas City as a way to improve communication in the gay softball community and promote North American gay softball across the world.  If you have something that would make a good story in your city, contact us at diamonddish@outlook.com today.